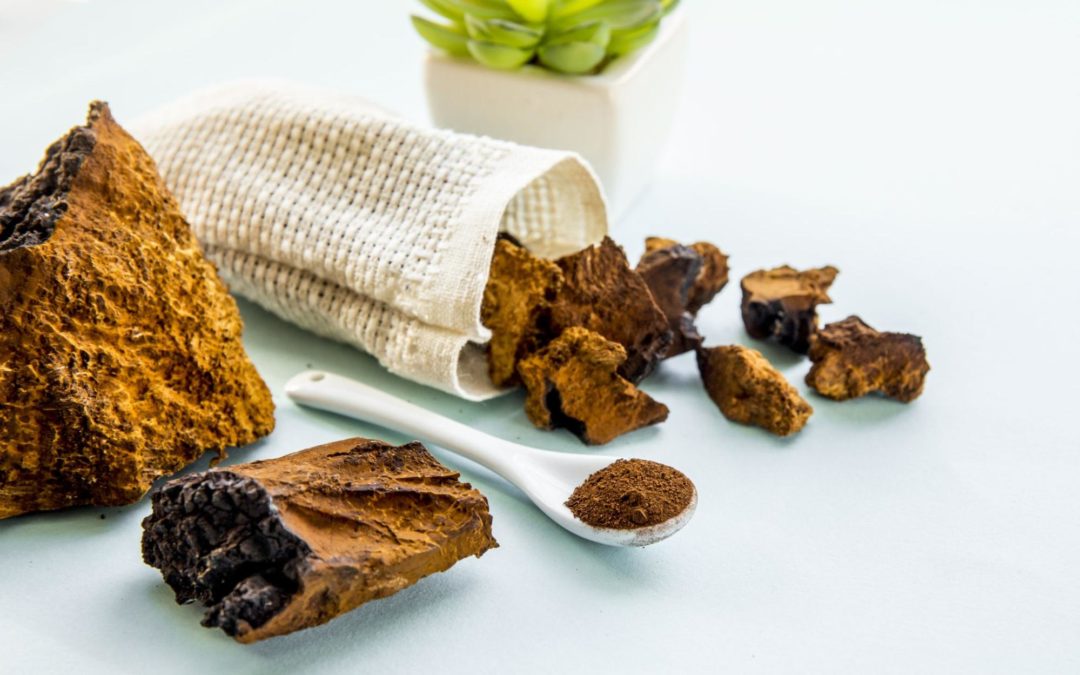 Chaga is often referred to as the king of medicinal mushrooms, and for a good reason.

Is there anything it can’t do?

Chaga contains highly beneficial levels of antioxidants and is rich in vitamins A, C, B, D and E and minerals such as iron, calcium, zinc, manganese and selenium.

It’s a true nutritional powerhouse, and the benefits of chaga mushroom are far-reaching.

Importantly, science is backing up the claims and anecdotal success stories of this fascinating species of fungus.

What is Chaga Mushroom?

Despite falling into the medicinal mushroom category, Australian Chaga mushroom is not actually a mushroom per se.

Chaga (Inonotus obliquus) is a parasitic fungus that grows almost exclusively on the bark of birch trees in the frigid climates of Northern European countries, Canada, Alaska, and Siberia.

Chaga mushroom spores infect the host tree’s trunk through a wound, such as where a branch falls off. As the fungus grows, it slowly develops into woody growth known as a sterile conk made up of wood lignans (polyphenols found in plants) and mycelium (the fungal root system).

The conk, or hardened mycelial mass, is the part of the mushroom harvested for medicinal mushroom supplements.

If harvesting is done carefully and the tree isn’t wounded, the birch trees can produce chaga roughly every three to five years.

The chaga mushroom, or sterile conk, certainly won’t be winning any beauty contests. It looks like nothing more than a dark browny-black mass of burnt charcoal, but the inside is where the magic happens and is a distinct orange golden colour.

Related: How to grow chaga mushrooms at home 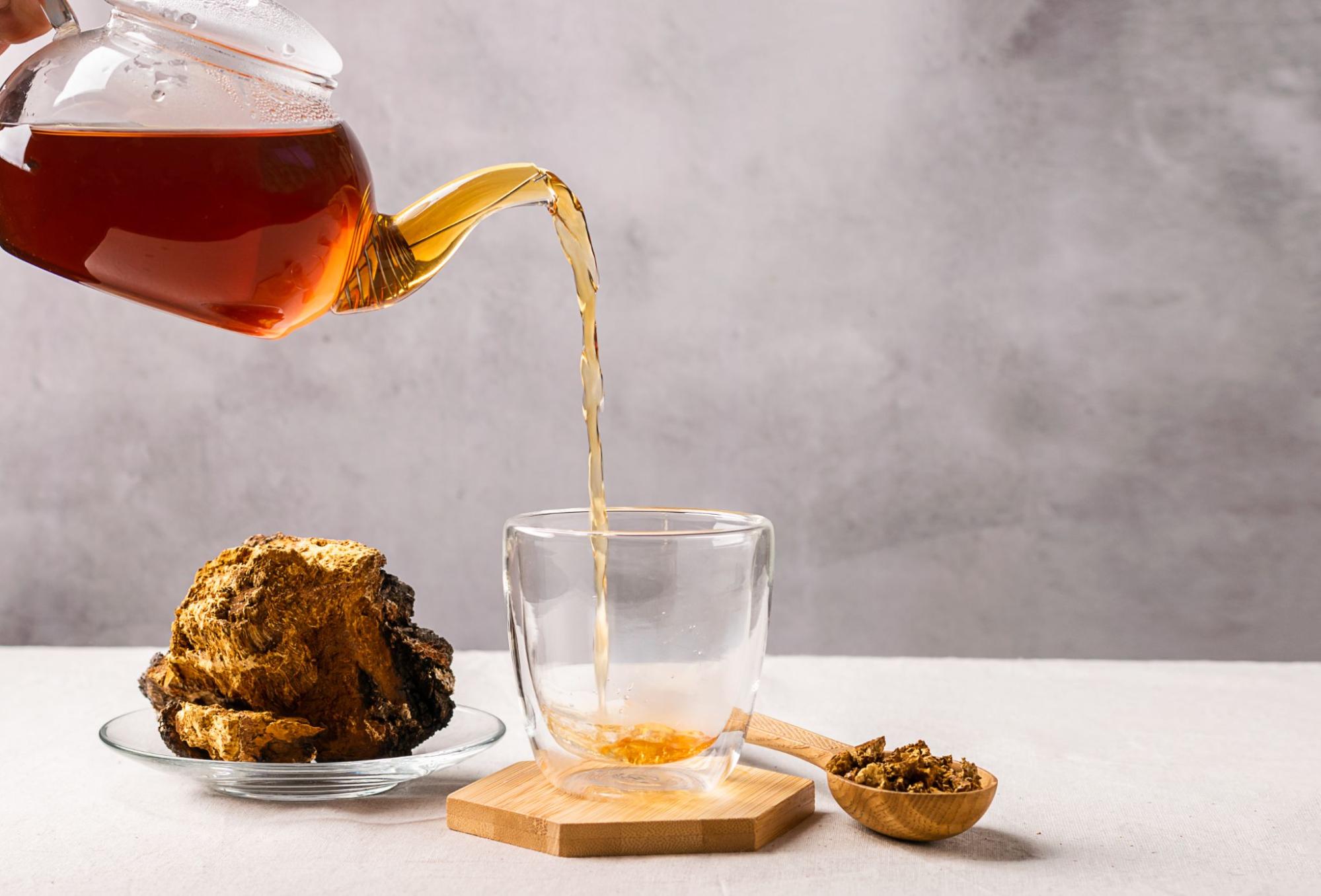 Triterpenes are a compound found naturally in plants and act as potent anti-viral and anti-inflammatory agents.

The two most notable triterpenes found in chaga mushrooms are betulin and betulinic acid, and in fact, they are found in high concentrations in the bark of the white birch tree, where chaga commonly grows.

However, studies have found that a small amount is produced endogenously by the chaga fungus.

“Betulinic acid has been shown to induce mitochondrial apoptosis in different cancer cell lines and inhibit the enzyme topoisomerase, which is essential for the unwinding and winding of the DNA strands in cell replication. In addition, it possesses anti-retroviral, anti-parasitic and anti-inflammatory properties. It is currently being developed as an anti-cancer agent,” – Martin Powell.

Polysaccharides are long-chain carbohydrates that provide nutrition in the human diet and contain anti-inflammatory properties along with a host of other health benefits that also support immune health.

The most notable polysaccharides in chaga mushrooms are beta-blucans which are responsible for the immune-modulating effects commonly associated with this species.
Melanin
Chaga contains high levels of melanin which contribute to its dark brown appearance. Fungal melanin has powerful antioxidant properties that scavenge free radicals and reduce damage caused by oxidation. Additionally, it also protects humans from the harsh UV rays of the sun.

One study has demonstrated the radioprotective qualities of melanin in a rodent study.

Mice were given black wood ear fungus, which is high in melanin. Researchers found that it protected 80% of mice from a lethal dose of radiation. Meanwhile, the control group of mice who received mushrooms devoid of melanin died from gastrointestinal issues.

Chaga is loaded with amazing health benefits and has one of the highest ORAC scores of any food.

ORAC stands for oxygen radical absorbent capacity and determines the antioxidant value of food. This means chaga has the unique ability to protect the body from free radicals that contribute to disease and dysfunction.

Chaga has a long history of use in herbal and folk medicine in Russia and other Northern European countries and was traditionally used to treat gastrointestinal conditions, diabetes and heart disease.

However, as further research emerges, it’s becoming evident that chaga can improve a number of other conditions.

“Mushrooms are miniature pharmaceutical factories, and of the thousands of mushroom species in nature, our ancestors and modern scientists have identified several dozen that have a unique combination of talents that improve our health.” – Paul Stamets, Mycologist.

With this in mind, let’s take a look at the science behind the top 7 chaga mushroom benefits.

Cancer is ubiquitous in today’s modern world. Emerging scientific research indicates that chaga mushroom may be a powerful compound when it comes to fighting cancer.

Over the past decade, several studies have examined the anti-tumour properties of various chaga extracts and found that this natural dietary supplement offers remarkable efficacy in treating solid tumours in mice.

In 2016, researchers studied the effects of chaga on tumour-bearing rodent models, and found that mice who received chaga experienced a 60% tumour reduction.

Moreover, mice with metastatic tumours (cancer that has spread to other parts of the body) had a 25% decrease in nodules compared to the control group.

“Chaga treatment led to cell cycle disruption as evidenced by decreased steady-state cyclin mRNA expression and an increase in the number of cells in the G2 phase of the cell cycle. Moreover, chaga treatment led to melanoma cell toxicity in a dose-dependent manner. These data suggest that ethanol extracts of chaga may have the potential as an anti-melanoma treatment.”

Chaga is one of the highest sources of betulinic acid, which is renowned for its ability to kill cancer cells.

Chaga mushroom is often listed as one of the top anti-cancer and anti-tumour dietary supplements and research has demonstrated chaga to be beneficial for colon cancer cells, stomach, endometrial, lung, breast, and prostate cancer.

Chaga contains an abundance of beta-glucans which can effectively strengthen the immune system.

Beta-glucans are a glucose polymer (sugar) found in the cell walls of specific plants, bacteria and fungus and yeasts. When eaten, they become a soluble and fermentable fibre.

Soluble fibres are known for stimulating immune cells in the gastrointestinal system and have positive effects on a wide range of diseases such as cardiovascular health, diabetes, and skin diseases.

The antioxidant activity of different medicinal mushrooms has been linked to the total level of phenolic compounds. Chaga has been found to contain a very high phenolic content, contributing to its amazing ability to scavenge free radicals and reduce oxidative stress.

Melanin is another compound found in high concentrations in the chaga mushroom, and it has been identified as having significant renoprotective and antioxidant properties [5].

Chaga is also a nutrient-dense superfood, chocked full of essential vitamins and minerals, including:

Chaga can help us build healthy and robust gut function.

A study found that mice who received chaga polysaccharides had a healthier microbiome due to bacterial changes in the gut.

The therapeutic effect of chaga polysaccharides was also found to improve gut health for mice with chronic pancreatitis.

As Hippocrates said, “all disease begins in the gut”, ensuring a healthy microbiome through medicinal mushroom supplementation and a clean diet can go a long way to ensuring overall peak physical and mental health.

Inflammation is part of the immune system’s defence system and responds to various foreign invaders, such as viruses, bacteria and environmental chemicals and toxins.

Inflammation can either be chronic or acute depending on the situation; for example, if you cut yourself, it will elicit an acute inflammatory response to heal the wound. However, many conditions also contribute to long-term inflammation within the body.

Chaga is an antioxidant powerhouse and supports a robust response to inflammation. It appears to work by regulating the production of cytokines involved in inflammation, making it an excellent medicinal food for people suffering from chronic autoimmune conditions.

In another study, diabetic mice were supplemented with chaga and saw a 31% decrease in blood sugar levels over the following weeks.

Part of chaga’s effects on blood sugar may be credited to suppressing an enzyme that breaks down starch. Blocking this enzyme helps slow down glucose (sugar) absorption in the digestive system, allowing blood glucose levels to remain stable.

The unique beta-glucans and betulinic acid compounds found in chaga simultaneously provide nutrients for the skin and fight free radicals that destroy skin health. All of these factors may help slow the signs of ageing.

In one case study, researchers found that 9-12 weeks of chaga supplementation effectively treated patients who presented with both Psoriasis and other pro-inflammatory disorders of the GI system, liver and biliary system.

Accessing chaga mushroom Australia is relatively easy, however, you should do your research to ensure you’re purchasing a high-quality, wild foraged product that doesn’t contain any toxins or heavy metals.

How to take chaga?

Traditionally chunks or powdered chaga has been immersed in hot water to make tea. The hot water extraction method ensures maximum availability of the bioactive compounds chaga is known and loved for.

Chaga tea has a distinct, slightly bitter flavour profile. The concentration of the tea will determine how robust the flavour will be.

However, an ethanol (alcohol) extraction has superior levels of all sterols, triterpenes, and lignin, which make up some of chaga’s most impressive characteristics.

Always follow the instructions of your chaga supplement, as this is a guide to the correct dosage.

Most people benefit from supplementing ¼ to ½ a teaspoon to start, which equates to roughly 2.5g.

It’s recommended not to exceed 3.6g per day.

However, an ethanol (alcohol) extraction has superior levels of all sterols, triterpenes, and lignin, which make up some of chaga’s most impressive characteristics.

Chaga is generally well tolerated, and side effects seem to be few and far between. However, many studies on chaga have been conducted on animals, and it’s always important to speak with a health professional.

One important thing to remember about chaga is that it is high in oxalates, which may prevent the absorption of some nutrients and is possibly toxic in high doses.

Oxalates are a compound found in the food we consume, but they are also produced as waste by our bodies.

As oxalates leave the body, they bind with calcium, increasing the risk of kidney stones for some people.

If you have kidney disease or a history of kidney stones, your doctor might advise you to follow a low-oxalate diet.

Chaga may also increase the risk of bleeding, so it’s best to discuss with your doctor if you have a bleeding disorder.

When is the best time of day to take chaga?

Chaga is not a stimulant or energising medicinal mushroom and is suitable to consume at any time of the day without keeping you awake at night. Because it has adaptogenic properties, it’s great at calming the stress response. It makes a great addition to your morning routine.

How long does chaga take to work?

Does chaga interact with any medications?

Chaga is not recommended for anyone taking anticoagulants (blood thinners). Chaga may slow blood clotting, and it’s best to discuss your medical history with a GP.

Chaga mushroom extract benefits: what are the most common ways to take consume chaga?

Chaga mushrooms are made into a variety of different supplements including powder, capsules and a liquid alcohol extract, which is by far the easiest way to get the health benefits of chaga extract.

Chaga Tea – Either chunks of chaga or a powdered extract can be steeped in hot water to create a medicinal chaga mushroom tea.

Chaga Coffee – Some people prefer to add chaga mushroom powder into their coffee as it’s said to mitigate the jittery effects caused by caffeine.

Liquid chaga extract – Offers an easy and convenient way to consume chaga mushrooms in a concentrated formula, while also ensuring all the same health benefits of powder or capsules.

Is chaga an edible mushroom?

Chaga is not the same as other edible mushrooms and can’t be consumed as part of a meal for example. However, chaga mushroom benefits can still be obtained from consuming chaga supplements on a daily basis which can help combat oxidative stress, contribute to healthy blood sugar levels, and boost the immune system.