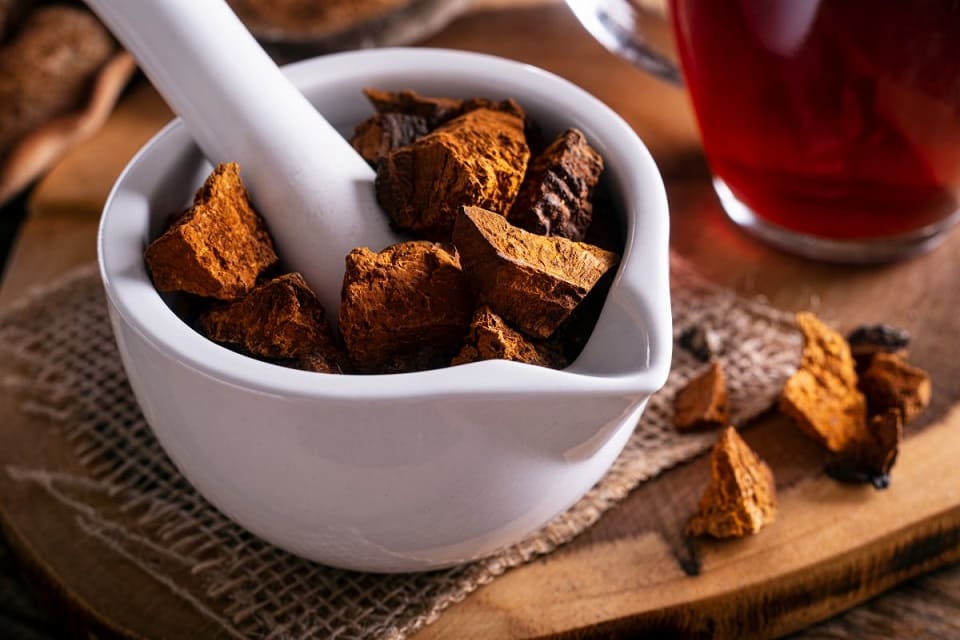 Known as the “OG, King of Medicinal Mushrooms,” It’s a very slow-growing mushroom that primarily grows on the bark of birch trees in cold climates such as Siberia, Northern Canada, Russia, Northern Europe, Korea and Alaska.

As it grows, it gets its nutrients from its host, the birch tree and because it’s slow-growing, it has lots of time to concentrate the phytonutrients into its flesh.

A 2009 PubMed study found that triterpenes, the compounds found in Chaga and some other mushrooms, cause tumour cells to self-destruct. Unlike other cancer treatments, however, Chaga does not appear to harm healthy cells.

The Chaga mushrooms medicinal compounds also translate to great skin. Modern life contributes to inefficiencies in SOD (Superoxide Diamatuse) which could cause skin discolouration and wrinkles. Fortunately, Chaga has some of the highest amounts of SOD which helps to treat skin cells to prevent such a scenario from happening.

What makes Chaga so effective in skin health is its ability to strengthen resiliency to damaging irritants found in nature, as well as reduce skin sensitivity.

Some research on mice suggests that Chaga may help regulate the production of cytokines, supporting the immune system by assisting cells in communicating with one another. This could help fight infections, from minor colds to life-threatening illnesses.

The importance of vitamin D has become apparent since the pandemic. Like all mushrooms, Chaga produces vitamin D when exposed to sunlight. Mushrooms are the only non-animal life form that can help humans get this essential nutrient.

Chaga’s role in reducing inflammation is via its role in regulating cytokine (specialized proteins) production. Chaga has the most robust antioxidant activity when compared against three other common medicinal mushrooms that also fight oxidation. By reducing oxidation, a general driver of inflammation, inflammation, in turn, is reduced.

By reducing an overactivated immune response, Chaga mushroom can limit harmful inflammation. One way it does this is by decreasing the expression of NF-kB a molecule that activates an inflammatory response

Other nutrients found in Chaga:

We grow most of our medicinal Mushrooms in the pristine environment of Byron Bay Australia. Unfortunately, the climate here is not conducive to Chaga. Our Chaga is sourced from Canada. It is wild-foraged, sustainably and ethically harvested, free from any heavy metals or chemicals. We then dual-extract using our unique, month-long extraction process to draw out all the potent medicinal compounds. The result is a powerful, potent and bioavailable sub-lingual tincture. Our Chaga mushroom is available to buy online from shroomunity.com.