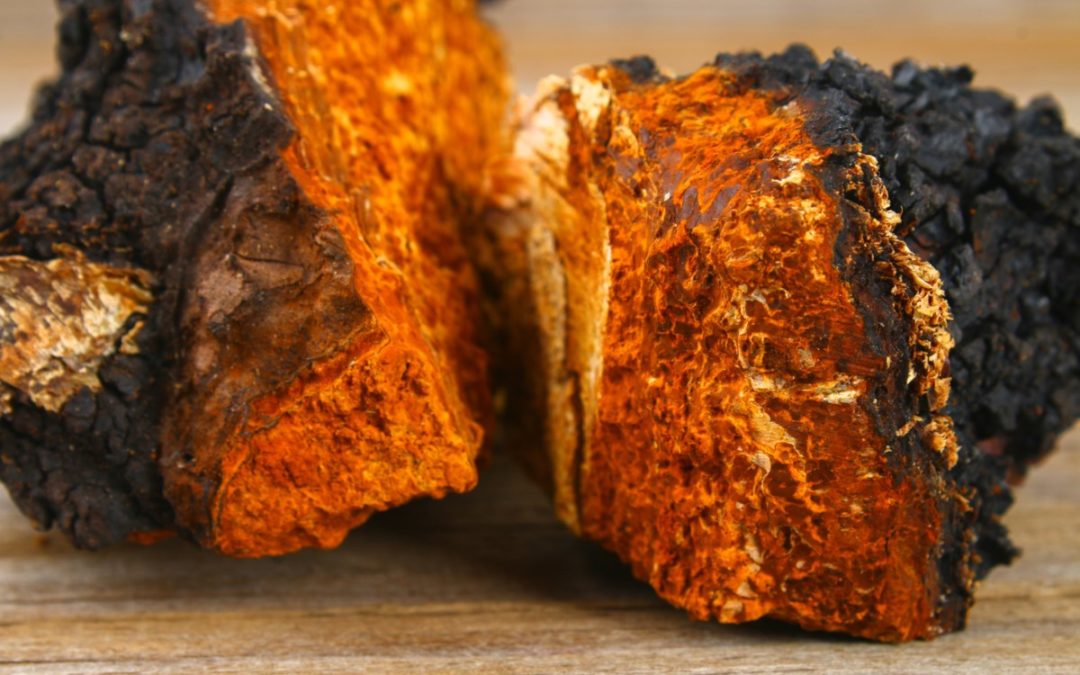 Chaga is one of the most nutrient-dense superfoods on the planet. This is why it’s often
referred to as the ‘OG’ King of mushrooms. The Health Benefits of Chaga Mushrooms are
many; it’s one of the highest antioxidant foods you can find.
Chaga looks like burnt charcoal or an oversized roasted marshmallow. It grows on Birch
trees and can take up to 30 years to mature. The black, cracked outside shell is known as
the sclerotium, a dense black mass of mycelia growing outside of Birch trees.

Where is it found?

Many major Northern climate dynasties have used Chaga for health and healing. It grows
everywhere from the northern parts of China, Russia, and Finland and Canada and in the
upper northeast United States, including Minnesota and Michigan.

The Chaga Mushroom is considered an anti-aging compound. It’s also why it’s a key
ingredient in our popular Longevity stack.

Our bodies are continuously damaged by free radicals. High levels of antioxidants found in
Chaga mushrooms counter the damage done to us by free radicals. One of Chaga’s most
important characteristics is superoxide dismutase; an enzyme which forms a critical
defence against oxidative stress in the body. It can also reduce inflammation and help
prevent pre-cancerous changes within cells. Our body’s natural superoxide dismutase
levels decline as we age, leaving us more vulnerable to the damage free radicals can do.
The antioxidant and anti-inflammatory properties that Chaga exhibits can play a role in
slowing the aging process by protecting our cells and supporting them to function
optimally.

A 2016 Study shows the positive effects Chaga can have on longevity, the decline in motor
and cognitive function as well as it’s anti-cancer effects:

According to this 2016 study:
Cancer is a leading cause of morbidity and mortality worldwide. The extracts of Inonotus
obliquus (Chaga mushroom) demonstrate potent anti-tumour activities and have been
used to treat cancer in several countries.

This 2009 study found that triterpenes, the compounds found in Chaga and some other mushrooms, cause tumour cells to selfdestruct. Unlike other cancer treatments, however, Chaga does not appear to harm
healthy cells.

Research on mice suggests that Chaga may help regulate cytokines’ production,
supporting the immune system by assisting cells in communicating with one another. This
could help fight infections, from minor colds to life-threatening illnesses.

This 2011 study shows the positive effect Chaga has on the immune system.

Recovery is fast becoming a vital aspect of all professional sports. Whether it’s an ice bath,
sauna, sleep or supplements. Recovery and inflammation are on the tips of the worlds
peak-performers.

Chaga’s role in regulating cytokine production may also help control inflammation- vital for
recovery from the most strenuous training. This also points to a role for chaga in fighting
autoimmune conditions and possibly some other diseases.

Recent studies like this one: suggests that some conditions that are not considered inflammatory, including depression,
maybe partly due to chronic inflammation.

As for vitamins and minerals, Chaga mushrooms are rich in B-complex vitamins, vitamin D
and several minerals, including potassium, zinc, iron, calcium and magnesium. Chaga
mushrooms are also a great source of dietary fibre- something that is now recognised and
linked to a wide array of health benefits.

The climate in Australia isn’t conducive to growing this strain of medicinal mushrooms, so
we are very careful sourcing ours from Canada’s pristine mountains. Our Chaga is wildforaged and free from any heavy metals and pesticides. It’s then dual-extracted in the flawless environment that is Byron Bay- Australia. You’ll note the thick, dark colour of our Chaga compared to other less-potent extracts on the market. That’s because our unique
dual-extraction process takes anywhere from four-six weeks and we are very careful in
sourcing the highest quality Chaga on the market- Just as nature intended. Nothing we
make comes from China where productions standards can be lower for growing medicinal
mushrooms on a large scale. One of the motivations for setting up ‘Shroomunity’ was the
plethora of cheap Chinese mushrooms that have flooded the Australian and US markets. 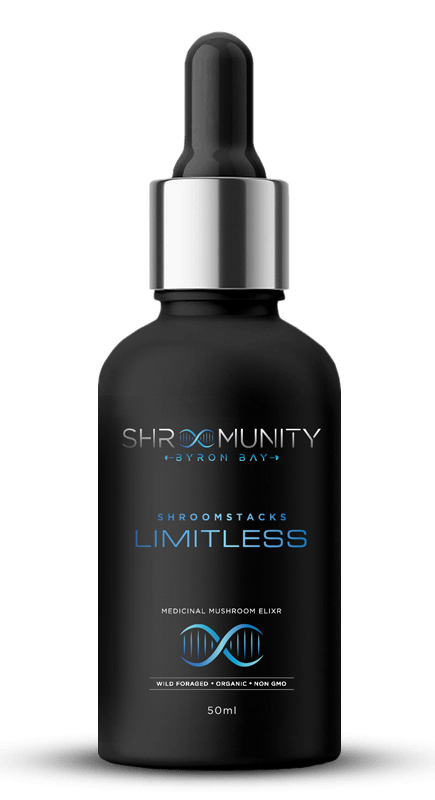 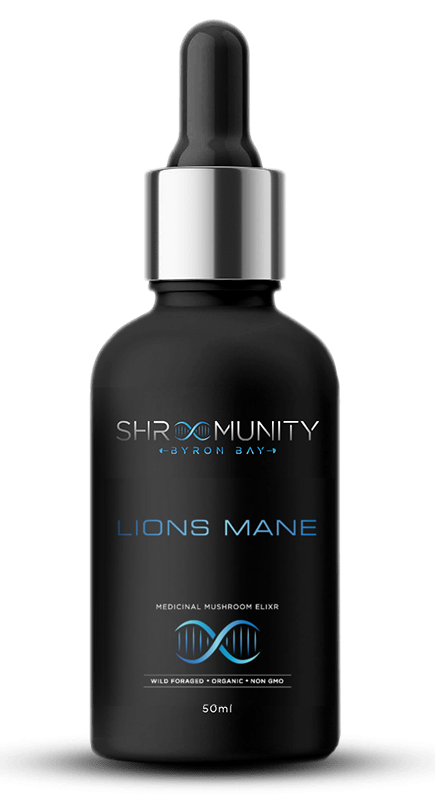 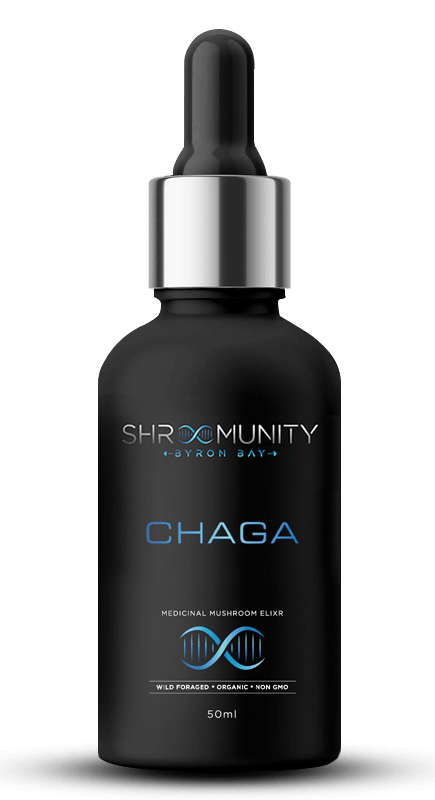 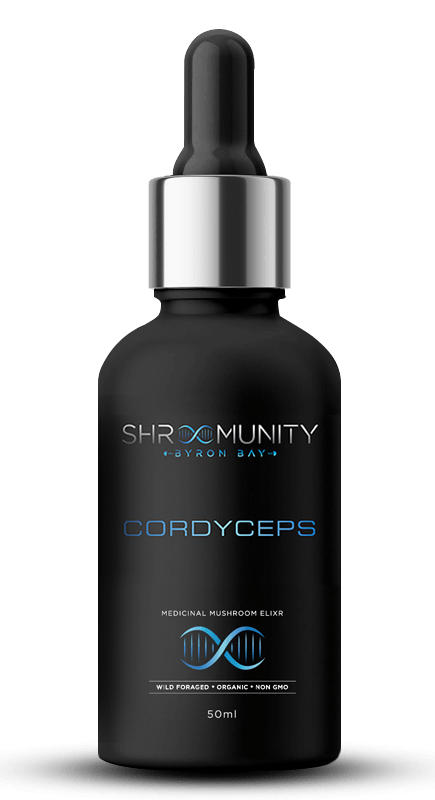 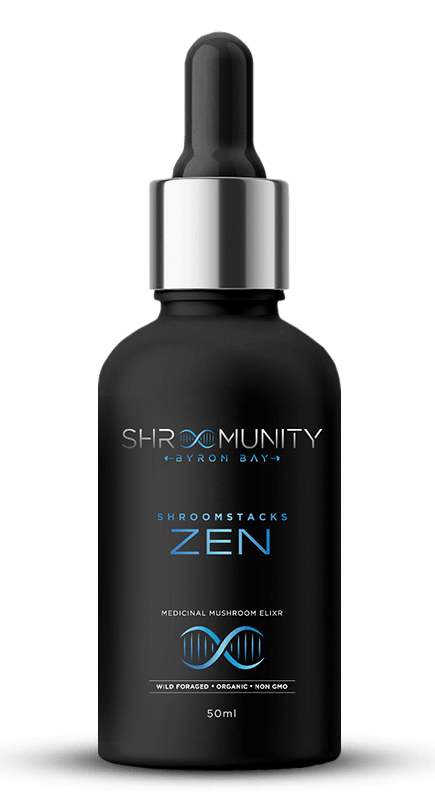 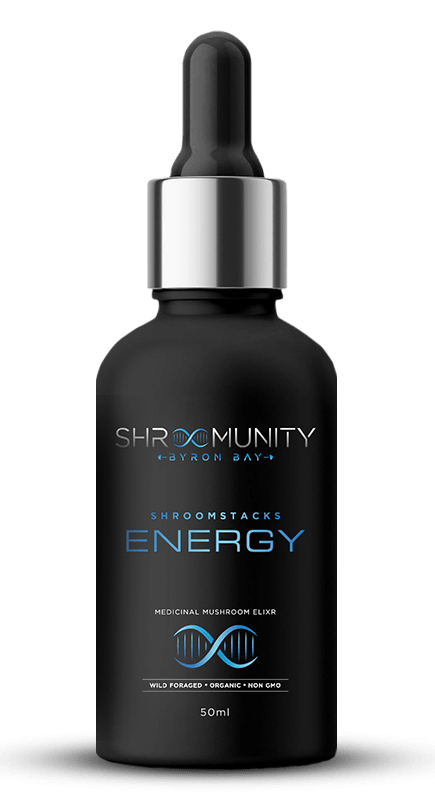 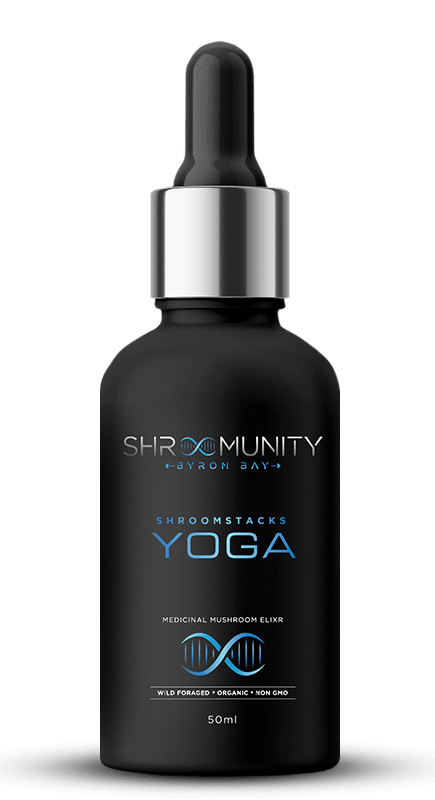 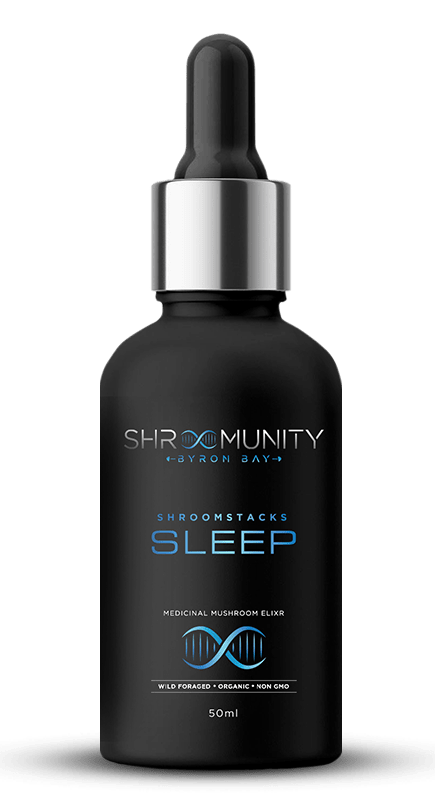 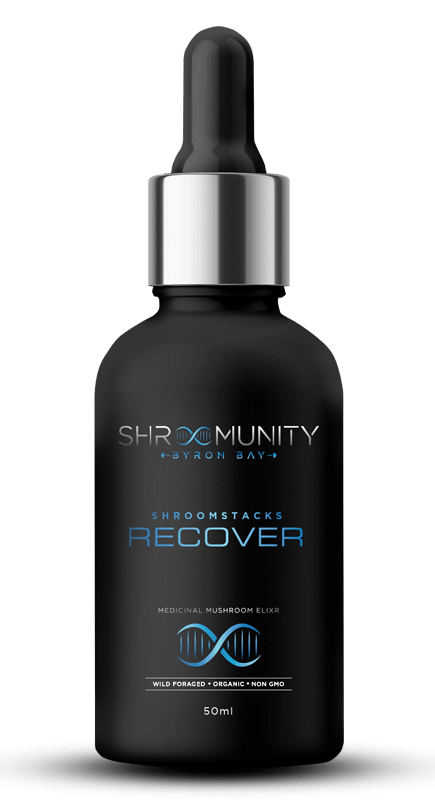 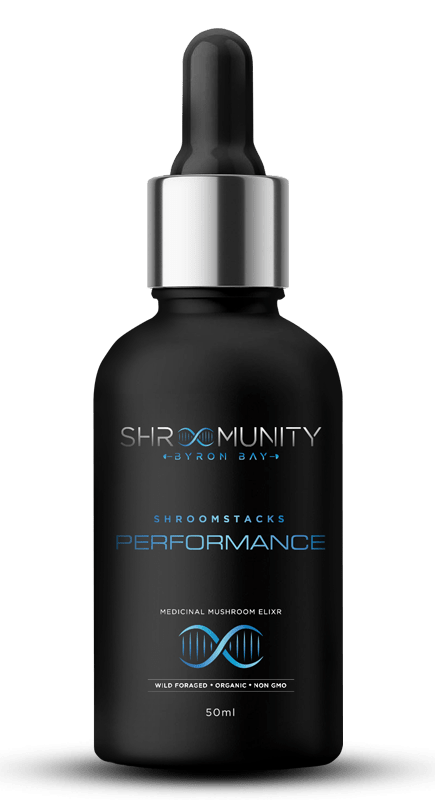 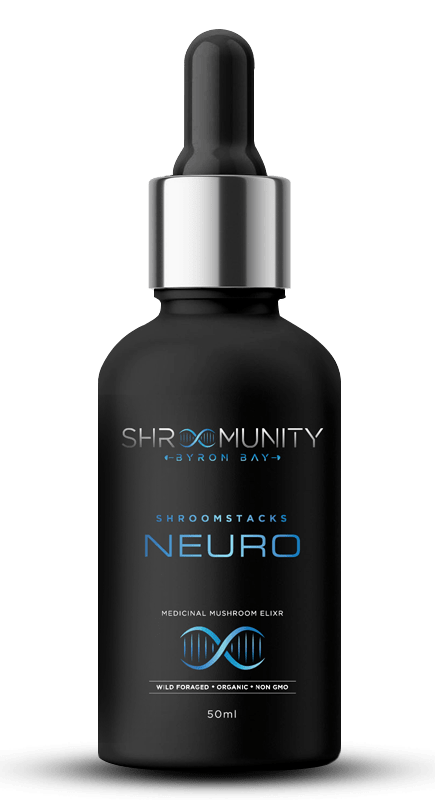 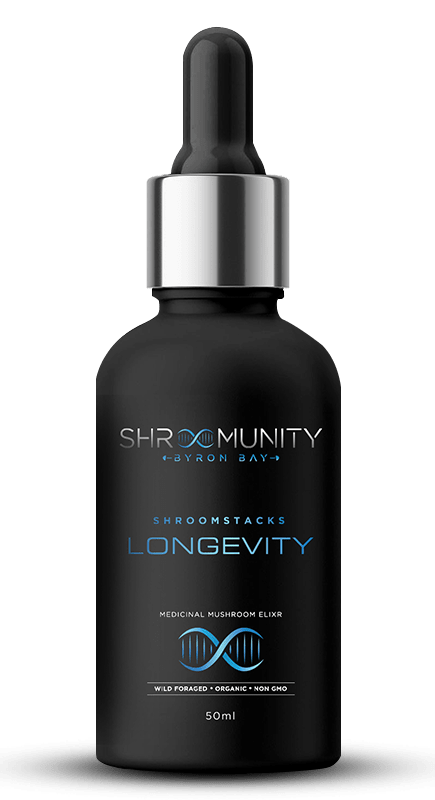 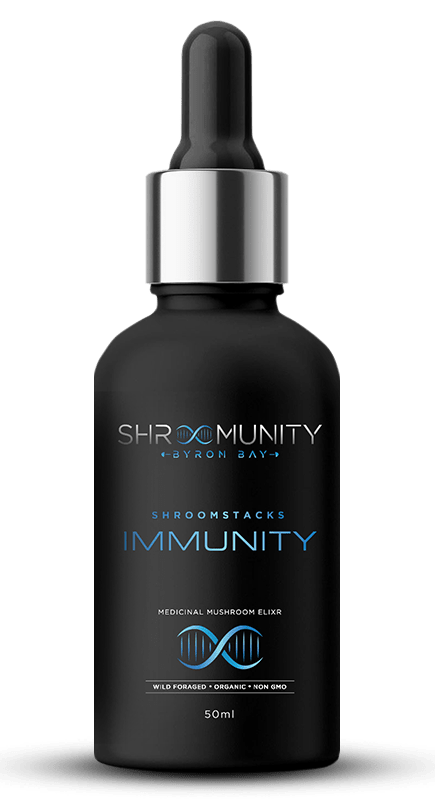 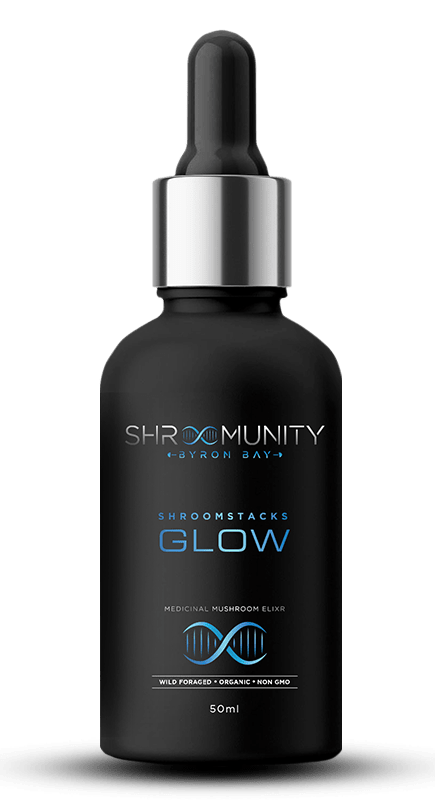 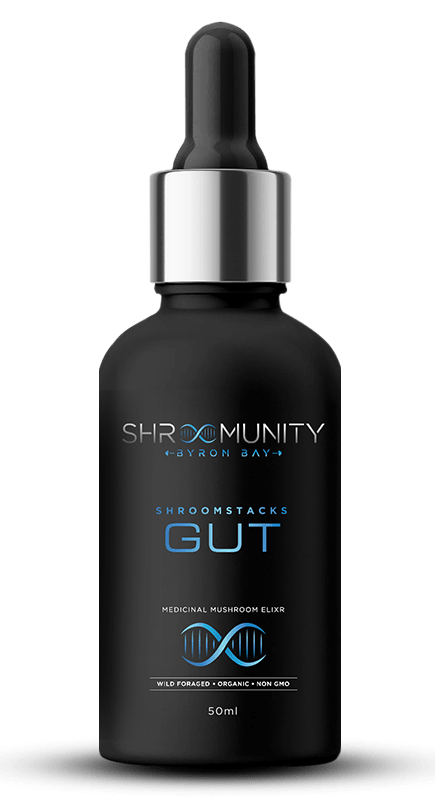 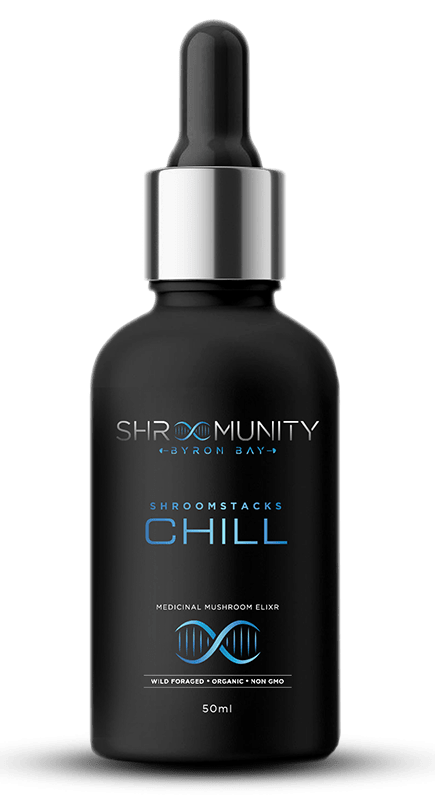