How to grow Chaga mushroom 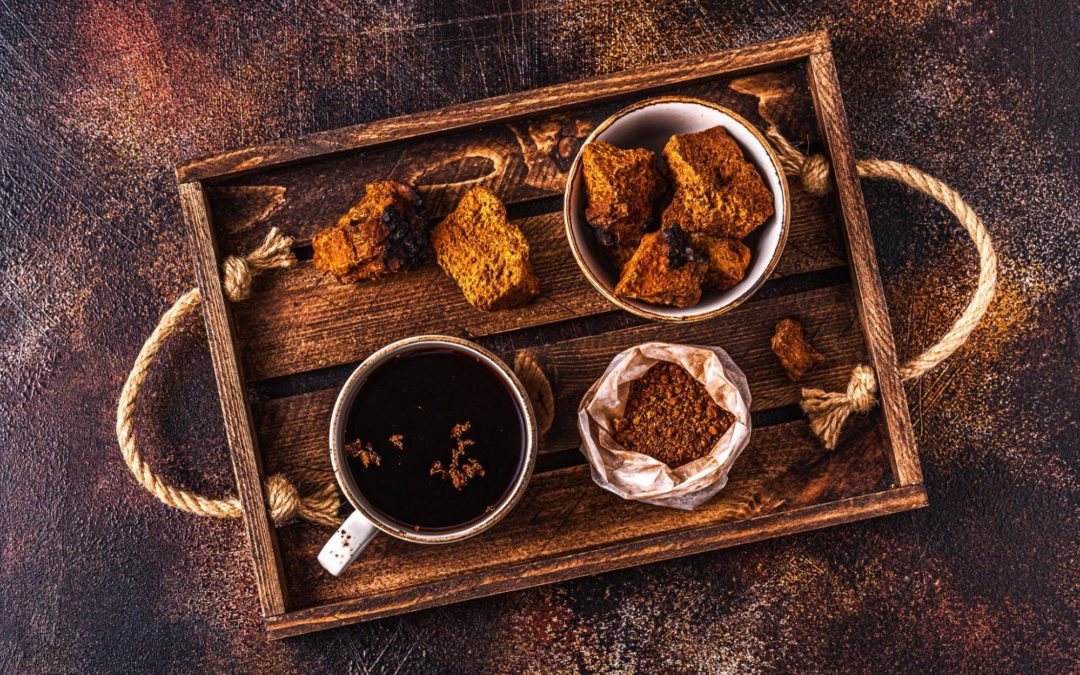 So you’ve done your research on the amazing health benefits of this functional fungus, and you’re wondering how to cultivate your own at home?

The popularity of chaga (inonotus obliquus) has grown exponentially over the last decade, as the ancient healing wisdom of Siberian and Russian herbalists is validated through a growing body of scientific evidence.

So it makes sense you might want to try growing Chaga mushroom yourself. Unfortunately, it’s extremely unlikely you will find wild chaga mushrooms growing in Australia as it prefers the colder climates of countries in the Northern Hemisphere. For this reason Chaga mushroom extract is becoming more and more popular online

Let’s dive into the fascinating fungus-y world of the chaga mushroom and learn a little more about how and where it grows and how chaga mushroom supplements are created.

Where does chaga mushroom grow?

There are a few barriers to cultivating chaga in Australia, the number one issue being the climate in which it grows.

Chaga is often found growing on birch trees in the cold climate of the northern hemisphere and is unable to grow in warmer climates as it either prohibits the fungus from growing or kills it entirely.

Only chaga mushrooms harvested from extremely cold climates can be used for human consumption.

Unless you live in or near the Arctic Circle, growing chaga would be pointless as it would lose many of its beneficial nutritional compounds.

What is the life cycle of Chaga mushrooms?

Chaga is a parasitic fungus that naturally grows on the bark of live birch trees.

However, it actually starts its life inside the tree’s trunk and grows slowly from within the tree to eventually occupying a space on the bark of the tree.

So, how long does Chaga take to grow?

Chaga can take upwards of 20 years to fully develop. The life cycle starts when airborne chaga spores penetrate the birch tree through injuries to the bark.

Chaga begins its life by parasitically growing on the inside of the tree trunk, eventually morphing into a protruding black mass known as a sterile conk.

The conk continues to grow on the bark of the tree, and as such, it continuously eats the timber as a source of nutrition. Eventually, the birch tree will die and disintegrate from the inside out.

Soon after it dies, the chaga fungus produces its rarely witnessed mushroom phase, where a large , spongey mass emerges on the bark. At this stage in the life cycle, the chaga spores float through the air to find another host to infect.

A chaga conk can grow over one foot in diameter, producing more nutrients as it grows. The growth rate depends on the conditions, but it generally takes about five years for a chaga mushroom to reach ten inches in diameter.

Chaga should only be harvested once it is at least the size of a grapefruit. 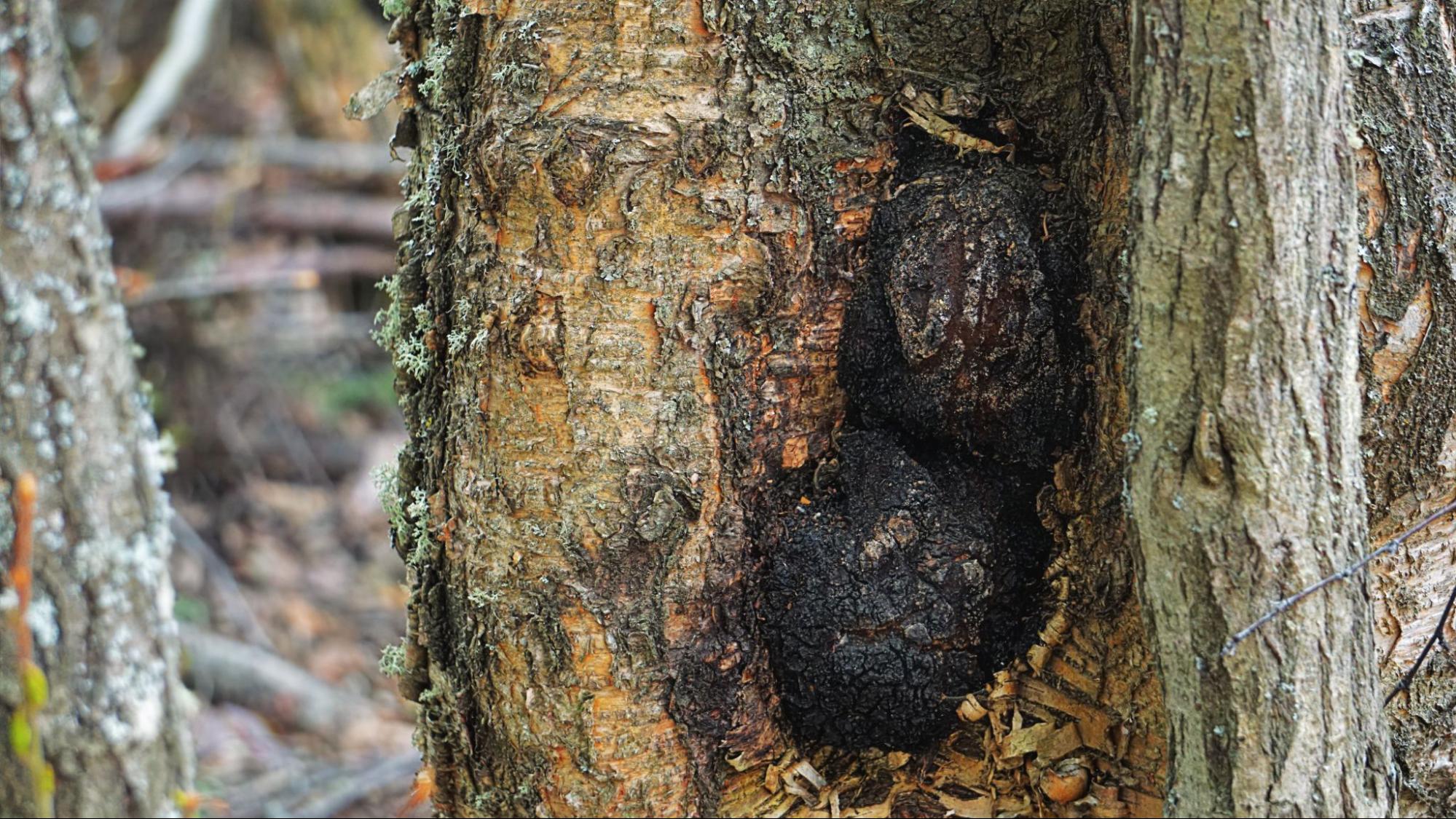 How is chaga sustainably farmed?

The chaga mushroom can be harvested up to three times every 5-7 years, making this one of the slowest growing medicinal mushrooms [1].

Can you grow Chaga in a lab?

Scientists have attempted to grow chaga mushrooms on a potato dextrose agar medium and other simulated mediums. This resulted in chaga mushrooms that showed a reduced number of compounds known as phytosterols.

Interestingly, sterols are the compounds produced by medicinal mushrooms that have demonstrated anti-tumour activity and offer essential overall health benefits.

While it may be possible for scientists to cultivate chaga in a lab with appropriate facilities and a large budget, it’s probably out of the scope of possibility for you or me.

Why wild chaga is better

This also may explain why cultivated chaga mushrooms haven’t been reproduced with the same benefits as wild chaga.

Chaga cultivation methods utilising mycelium on grain haven’t produced chaga with the same level or balance of compounds as mushrooms growing in the wild.

How is chaga mushroom used?

Besides the long historical link with folk medicine, another very interesting use of chaga came as a response to World War II rationing. Finns, in particular, harvested the chaga in nearby forests and steeped it in hot water to create a coffee substitute.

Chaga mushroom benefits are far-reaching, and the medicinal properties are being validated with further scientific study.

Still today, Chaga chunks are steeped in hot water to create chaga mushroom tea, which is consumed for its medicinal benefits [3].

Consuming chaga in a liquid tincture is also a beneficial way to absorb and assimilate the medicinal properties quickly. It’s also a super easy and convenient way to take a chaga extract without the hassle of brewing tea or adding it as a powder into other beverages or soups.

Importantly, a dual chaga extraction with both water and alcohol delivers the highest concentrations of beneficial medicinal compounds.

Are there different types of Chaga?

There are only one species of Chaga, and its Latin name is Inonotus obliquus. The fungus has three main components: the dense dark brown/black charcoal-like exterior known as the conk.

Inside the conk is a bright orange spongey layer, and then the most inner layer of the Chaga mushroom is lighter orange and has a cork-like texture that can be easily peeled away.

All three layers are useful for imrpoving health and wellbeing.

Alcohol allows the body to absorb beneficial nutrients rapidly after ingestion.
The speed at which alcohol enters our bloodstream is extremely fast due to our digestive system being densely populated with capillaries that absorb the alcohol.

When taking an oral Chaga tincture, the beneficial compounds catch a ride with the alcohol and enter our system very quickly, making the benefits more readily available.

Chaga looks like a black growth protruding from the side of a tree’s trunk. Its exterior is hard, appearing dark black and roughly textured, but it has a vibrant orange centre whose texture is similar to that of cork.