How to grow cordyceps mushrooms 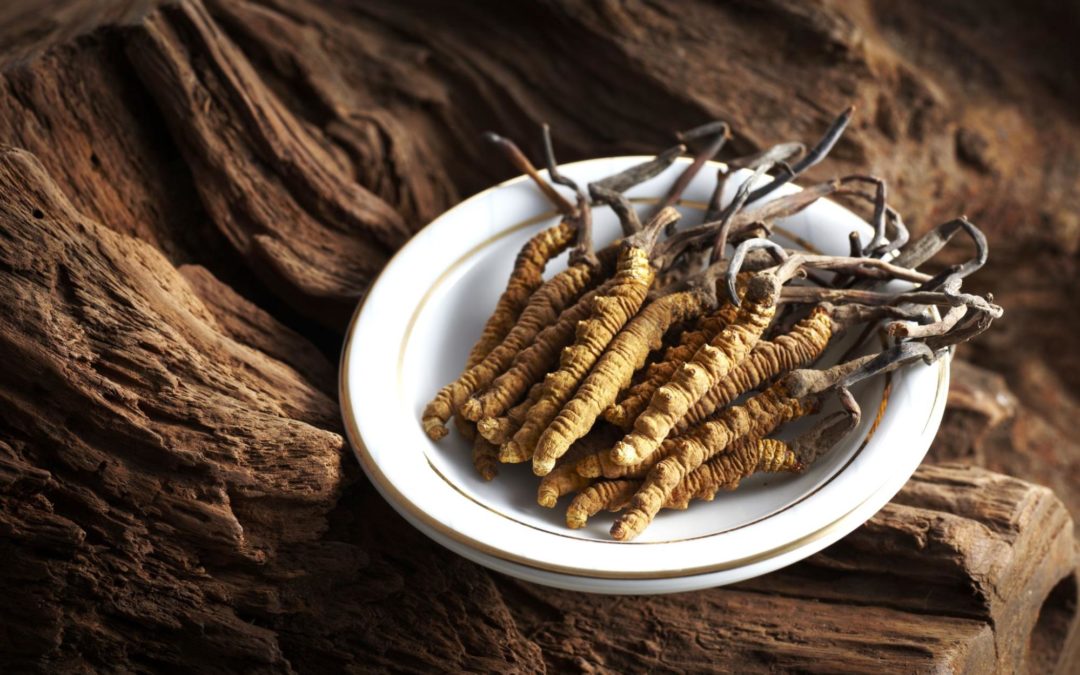 Cordyceps is a potent medicinal mushroom boasting a wide array of incredible health benefits.
It has been used in Traditional Chinese Medicine practices for over 500 years and was commonly used to treat kidney and lung conditions, heart disease and even cancer.

More recently, we’re seeing evidence of how it can boost athletic performance, increase energy, enhance immune system function, and is even a proven remedy for diabetic conditions.

The curative properties of the cordyceps mushrooms are still being studied, but the historical evidence coupled with recent scientific research is providing an insight into ways in which this fascinating fungus can help humans.

“Traditional healers in Sikkim [a state in Northeastern India] recommend the fungus/mushroom cordyceps sinensis for “all illnesses” as a tonic because they claim that it improves energy, appetite, stamina, libido, endurance, and sleeping patterns.”

Given all the fantastic benefits, it’s no wonder you’re interested in learning more about the mushroom cultivation process.

In this article, we explore what you’ll need to grow your own cordyceps and how to do it in five easy steps.

What you need to grow cordyceps mushrooms

It’s almost impossible to mimic the natural environment in which wild cordyceps grows unless, of course, you’re planning to sacrifice some poor unsuspecting insects and also have a source of cordyceps sinensis spores (more on the interesting way this fungus grows below).

Luckily, if you’re set on growing cordyceps at home, there are some alternative mushroom cultivation options that aren’t quite as gruesome as nature.

The equipment and materials required to grow cordyceps at home aren’t that difficult to find and can usually be purchased at a hardware or grocery shop.

However, things get a little more complicated with the cordyceps spawn or liquid culture as it can be somewhat challenging to access in Australia.

You’ll need the below ingredients and equipment to cultivate your cordyceps. 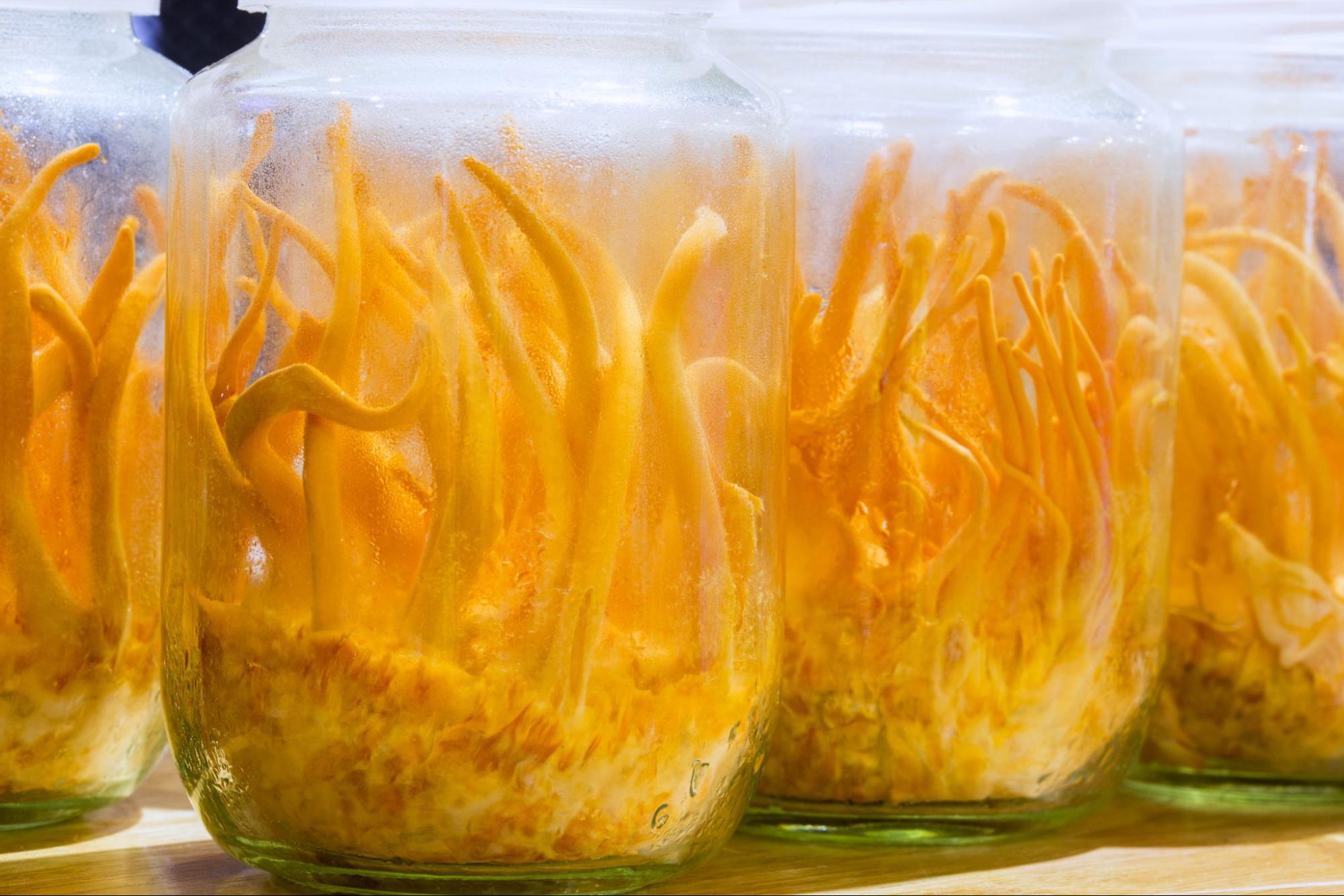 Creating a good media recipe is crucial for growing an abundant yield of cordyceps mushrooms.

The media is a combination of the nutrient broth recipe and grain, usually rice. These ingredients create a nutrient-dense substrate that provides a good source of vitamins, carbon and nitrogen for the fungus to survive.

Unlike plants, which use carbon dioxide and light as an energy source, fungi utilise pre-formed organic matter such as carbohydrates derived from sugar sources such as glucose and fructose. These are generally the preferred carbon source for the mushroom.

Fungi also utilise proteins from sources such as carbon and nitrogen; these molecules are assimilated from a complex digestive process between the fungi and growing media.

The next best option is a cordyceps militaris liquid mycelium culture, but again this can be hard to find online in Australia.

If you choose to purchase from an international seller, the liquid usually comes in a 10ml vial, and this should be dispersed evenly across the media within the jar.

The cordyceps mycelium thrives in a dark environment where the temperature is between 12-24° C.

It can take anywhere from 10 to 20 days for the spawn to fully colonise the growing media.

One study on the observations of cordyceps militaris mycelial growth noted that “Light was found to be the most critical single factor in determining the density, texture, and pigmentation of the mycelial culture of the fungus. However, under the light condition, the degree of pigmentation and mycelial density were found to be affected by the incubation period and type of medium.”

Step 4: Pinning and fruiting the mushroom

Similar to how other plants grow, the fruiting process is initiated by a change in light cycles. An ideal light cycle for cordyceps to grow is 16 hours on and 8 hours off.

Similar to the inoculation phase, the temperature should remain consistently between 15 to 20° C. If the temperature rises above 26° C, it will usually kill the growing mushroom.

The jar should be left closed and requires little maintenance or monitoring throughout the fruiting period, taking anywhere from 4 – 6 weeks.

The cordyceps fruiting body may grow to the top of the jar if left long enough. However, the mushroom can be harvested before this point.

If the fruiting body stops growing before it reaches the top of the jar, it means it has finished growing and is ready to harvest.

Once you’ve harvested the cordyceps’ fruiting body, they can either be dried or used fresh to create nutritious broths and teas to obtain the medicinal benefits. 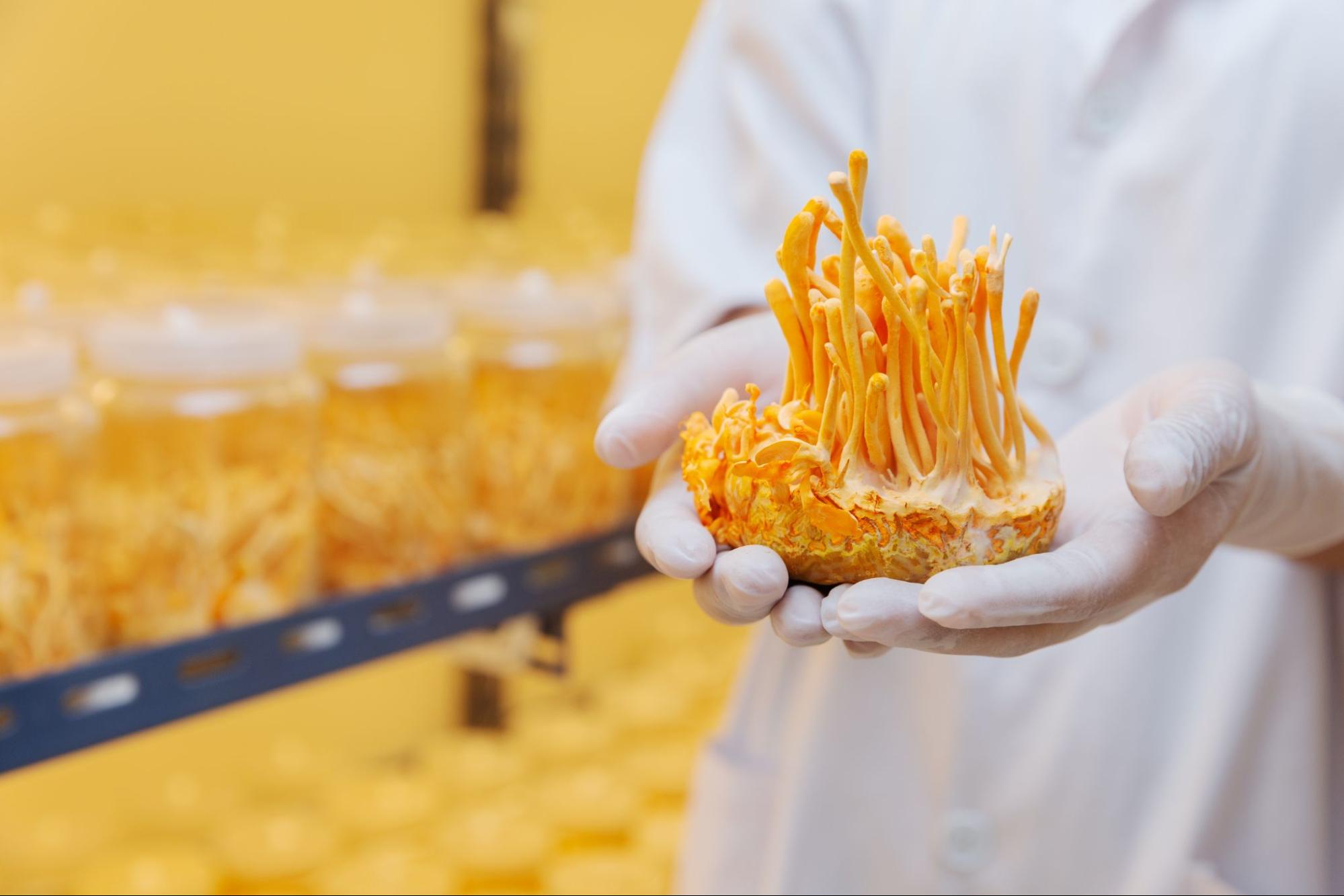 What is cordyceps exactly?

The use of cordyceps in Traditional Chinese and Tibetan Medicine dates back thousands of years, and ancient Chinese medical books note the pharmacological potential of cordyceps to treat a range of ailments.

While you may have heard about the exceptional health benefits cordyceps can offer our overall health and wellbeing, you may not be aware of the interesting way this fungus grows.

The Ophiocordyceps sinensis fungus is parasitic in nature and invades the body of living caterpillars and eats the host tissue to derive nutrients. Eventually, the caterpillars die from the inside out and the external body of the caterpillar becomes mummified, at this point the fungus grows from the insect host’s head, and once it reaches maturity it releases its spores thus starting the cycle again.

While this might gross you out, it’s essential to know that not every species of cordyceps grows on bugs.

When it comes to medicinal mushrooms, there are two important species of cordyceps: cordyceps sinensis and cordyceps militaris.

Due to the high demand for wild cordyceps sinensis mushrooms and its over-harvesting, it has become inaccessible to most and carries an incredibly high price tag.

However, researchers have developed a way to grow the cordyceps mycelium on a grain substrate or in liquid fermentation. However, this method of cultivation doesn’t allow for the fruiting body of the mushroom to grow.

Luckily, there is another species called cordyceps militaris that possesses similar medicinal properties to cordyceps sinensis and can be grown without insect hosts.
Thanks to recent scientific breakthroughs, the fruiting bodies of cordyceps militaris can be sustainably cultivated for use in supplements.

If growing your own mushrooms sounds a little daunting, or you’re unable to access the mycelium liquid or spores, the next best option is to consider a cordyceps supplement.

A liquid cordyceps extract is the most convenient way to ingesting the beneficial compounds for overall health and wellbeing.

Are cordyceps easy to grow?

If you’ve been pondering the questions “can I grow cordyceps?” and “Are cordyceps easy to grow?” then the below info will shed a little light on the difficulty of growing this species.

Given the way cordyceps sinensis grows in the wild, it can take a little bit of practice before you get the hang of DIY mushroom cultivation.

If you are farming fungus at home, the most common cordyceps species you’ll grow is cordyceps militaris. In the right conditions, it grows well on a substrate of grain and a nutrient-dense liquid.

While cordyceps militaris doesn’t require a lot of maintenance throughout the fruiting process, you need to ensure proper sanitation so no other competing microbes infect the fungus.

Given the parasitic nature of cordyceps sinensis and its propensity to thrive on insect hosts, it’s technically not a vegan-friendly product.

However, commercially cultivated crops of cordyceps militaris are generally not produced on an insect host and therefore are considered a vegan product.

It’s essential to read about the cultivation methods of any cordyceps supplements you are considering using to ensure they comply with any dietary requirements.

What does the cordyceps militaris fruiting body taste like?

Like many other mushrooms, cordyceps has a savoury, earthy/nutty flavour profile and makes an excellent addition to any soup or broth.

The fruiting bodies of the cordyceps militaris can be eaten both raw and cooked or even distilled into a liquid tincture which is an easy and effective way to access the medicinal benefits.